I’ve given myself an hour [edit: ended up being 3] and no more to write this so to cut to the chase: I wanted to respond, in detail, as to why there is no causality between Islamism and terrorism. Eustonites are very fond of the idea and they have been clamouring around a heavily illiberal speech given by David Cameron – so I wanted to respond. As usual, bibliography is at the bottom. Here is what the Prime Minister said:


…you don’t have to support violence to subscribe to certain intolerant ideas which create a climate in which extremists can flourish. Ideas which are hostile to basic liberal values such as democracy, freedom and sexual equality.


The root cause of the threat [of terrorism] we face is the extremist ideology itself… They [young people] are watching videos that eulogise ISIL as a pioneering state taking on the world, that makes celebrities of violent murderers… you don’t have to believe in barbaric violence to be drawn to the ideology. No-one becomes a terrorist from a standing start. It starts with a process of radicalisation. When you look in detail at the backgrounds of those convicted of terrorist offences, it is clear that many of them were first influenced by what some would call non-violent extremists.


[We must confront] groups and organisations that may not advocate violence – but which do promote other parts of the extremist narrative… We must demand that people also condemn the wild conspiracy theories, the anti-Semitism, and the sectarianism too.


The basic idea is that non-violent Islamist ideology -> violent Islamist terrorism. It’s an idea referred to as the “conveyer-belt theory of terrorism” propounded by (mostly non-academic) bodies like the Quilliam Foundation. This isn’t an unreasonable view. Back in 2011, I wrote a post advocating this idea on the basis of purported evidence provided by the Prevent review. Whilst it is not an unreasonable view, it is, as I have learnt, wrong.


Before explaining why, let’s start with definitions: an Islamist believes in the political application of Islam. A violent Islamist believes in the violent application of Islam. This is the dividing line between non-violent and violent extremism. Both are problems that should be tackled but the Quilliam view treats them as part of the same problem. Both are ideologies - which is why the idea that this isn’t an “ideological” problem is wrong, what matters is which ideology we’re talking about.
Specific Studies on the Relationship Between Islamism and Terrorism
The first study that we can refer to is Fair et al (2012) which explicitly looks at support for terrorism amongst three constituencies: (i) different degrees of practicing Muslims; (ii) Islamists (i.e., those who support political Islam); and (iii) jihadists (i.e., those who advocate a violent aspect of their ideology). To elicit whether people were Islamist, they were asked whether they supported Islamist political parties and the political implementation of Sharia. To gauge whether people were jihadists, they were asked the extent to which they supported non-state groups using violence. They found: 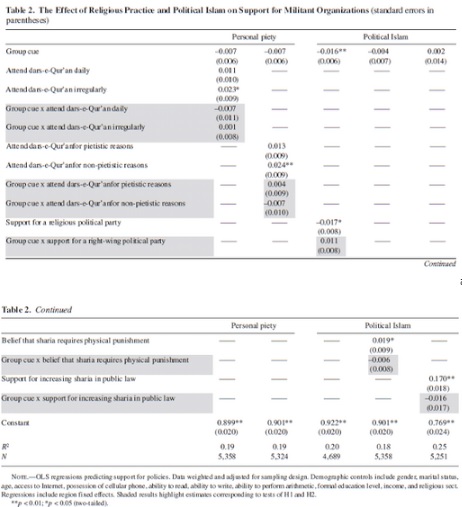 Supporters of [Islamist] parties were no more supportive of the militant groups than were those who supported avowedly secular parties (see column 3 of table 2) [and] even adherents of this more extreme form of sharia law are no more likely to support political violence than those who do not believe that sharia requires physical punishment (see column 4 of table 2). Further, regardless of their interpretation of sharia, respondents who thought that sharia should play a greater role in Pakistani law were no more likely to support militant groups than respondents who wanted a stricter separation of church and state (see column5).
Hence, Fair et al conclude it ‘does not appear that Islamism… is related to support for militancy.’ For those interested in more support for my last post on the lack of link between Islam and terrorism, this study also finds that religious practice is unrelated to support for terrorism. Unsurprisingly, the specific belief about violence (jihad) is related to support for terrorism. In some ways the result is unsurprising because its tautological: if you believe terrorism is justified, you support terrorism.

Next, we have Furia and Lucase (2008) who find that Islamic “consciousness” of Muslims in Egypt, Jordan, Lebanon, Kuwait, Morocco, Saudi Arabia, and UAE is unrelated to favorableness of Western countries. (In fact, somewhat interestingly, when you look at the results in Table 2 above, Islamism predicts positive attitudes toward France).
Next, Fair and Shapiro (2009) which asked people how they thoughts about the Womens Protection Act (legislation that Islamists were opposed to), intervention in curriculum of Islamist schools and ‘Talibanisation.’ They find ‘support for Islamist politics did not translate into support for militant organizations in any clean way... support for militant organizations is not positively correlated with support for “talibanization”’. 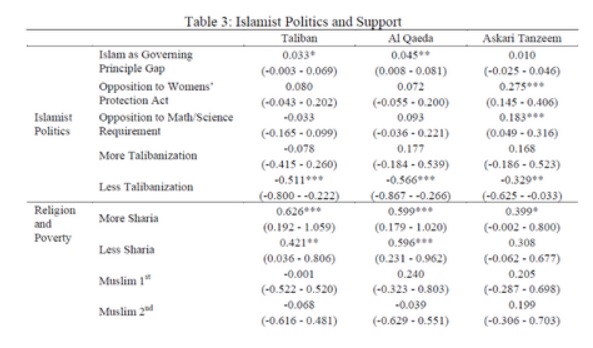 I think the wider point that Cameron makes is that government and local authorities should not partner with organisations who render apologetics for extremism, or are propagators of extremism themselves.

There is a confluence and overlap between non violent extremists and the dehumanising world view of ISIS. They agree on many aspects - the men who follow Maududi and his vision of life for example are offering an ISIS worldview without the strategic use of violence. Cameron's speech opens up this long neglected field, the laziness with which people accept that Islamists in the UK openly promote ideas and beliefs that are really intolerant and supremacist and that underlie the justification to violence.

This is quite apart from the openly Salafi Jihadi CAGE, who have many supporters and sponsors on the left side of our establishment, the ongoing activism of caliphate supporters in towns and cities.

There is no conveyer belt: there is optional framing however. That is, terrorism in the modern world is dominated by folk choosing the jihadi option. It provides the framing within which those so inclined by a combination of personal inclination and belief take up. Joining ISIS may be psychopathic sex tourism, but that is a program being offered in a very specific context.

YOu cite Bob Lambert uncritically, without caveat. This is the 13th Strike of the clock which taints the credibility of the entire article

Maajid Nawaz's response to the Guardian's opinion desk editor, re their rubbishing of the 'conveyer belt' view:
'You conveniently omitted at this stage my long explanation on exactly why the conveyor-belt theory is a red-herring. What I said was that whether or not non-violent extremism empirically leads to violence, misses the point entirely. Like racism, non-violent extremist ideas (e.g: that in an ideal Islamic state apostates must be ‘killed in their millions’) are bad for social cohesion, regardless of whether they lead to immediate violence. For example, just because generic racism or generic homophobia also cannot be empirically proven to lead to immediate violence, this doesn’t mean we simply tolerate such social ills in society. IN fact, we don't tolerate them. Yes, let us only ban violence (you also omitted at this point I referenced that I have consistently advised UK Prime Ministers against banning HT in the UK), but what we can certainly do - as we do with homophobia and racism - is to challenge non-violent extremist ideas in civil society in order to make them a taboo. I mentioned that I call this doctrine one of legal tolerance coupled with civic intolerance. I then went to state that despite the absence of empirical evidence either way, what cannot be denied is that there is a relationship, a link, to whatever extent, between believing that it is okay to kill apostates, and actually killing them. It is silly to deny that a pre-requisite for the act of killing apostates, is the belief that it is okay to kill them...'

If you're certain there's no causality between islamism and terrorism, I look forward to a blog post explaining the relationship that actually exists between these things, and what really causes the latter.

AM, as always a well-researched post. I also saw David Paxton's response to this. I think you're right that Islamism does not cause terrorism but I think it does make it more deadly. It's about stopping suicide-belts not conveyor-belts, as I write here: http://anthonycooper.blogspot.co.uk/2015/08/conveyor-belts-and-suicide-belts.html

Haroon Ullah is a member of the Secretary of State's Policy Planning Staff, where his portfolios include countering violent extremism and public diplomacy. Previously, he served as director of the Community Engagement Office at the U.S. embassy in Pakistan. Dr. Ullah has also worked as a Belfer Fellow at Harvard's Kennedy School of Government, focusing on democratization, counterterrorism, and religious political parties in the Middle East and South Asia.

Thanks for sharing!
Islamic Sharia Law