I published a post on the tenth anniversary of 9/11 explaining my thoughts on why people became so radicalised that they supported Al Qaeda and even became part of it. I emphasised the importance of cultural dissonance, i.e., feeling apart from a culture. I’m not going to go over the empirical support for my position again – I wanted to give more empirical evidence against a position I dismissed. I did not ignore foreign policy in explanation, but I did say it was neither necessary nor sufficient for terrorism.

The assumption behind thinking foreign policy leads people to lose their morality and start supporting a group that blows people in order to implement regimes that would make whole races and genders second class citizens is that they become aggrieved. This is typically used in the Palestinian context as well: what do you expect the Palestinians to do after their homes have been demolished and their cousins killed? What do you expect the Iraqis to do when the U.S occupies their land?

This assumption is wrong for multiple reasons – it plays on racist assumptions of Arabs as agents moved by external factors. One can point to several societies, including our own, where this faux analysis is not applied – even if there have been comparable or worse atrocities. This post is aimed at addressing that argument so I don’t have to repeat myself. As most of the arguments are about Hamas and Al Qaeda, those are the groups I’ll be addressing.

The Palestinians vs. Hamas

Starting with the Palestinians, this extends not only to IDF attacks but to Israeli policy – like the blockade. Except, there is no empirical proof for it: the blockade was implemented in 2007 – and yet, “according to a variety of polls, support for Hamas has steadily dropped since... its election in January 2006. [P]ublic support for Hamas has not just dropped in the West Bank but in its hometurf of Gaza” (Myths, Illusions and Peace, Ross and Makovsky, p.263).

This result shouldn’t be surprising – it was only after Hamas took over the Gaza strip, carried out a purge of Fatah members and usurped the executive in Gaza that Israel imposed the blockade. Aside from the social and economic woes that followed, this was an illegitimate move: often it is pointed out that Hamas is democratically elected – but this ignores everything that happened the day after the election. Hamas won the legislative elections and then proceeded to take control of the executive functions of government in Gaza – something they were not elected to do. The conflict that broke out between Fatah and Hamas in 2006 led the latter to go after Fatah officials and throwing them off buildings (for a full account of why Hamas took over and initiated a power grab, see here).

Even then, ignoring all of that (which is sufficient to lose all democratic legitimacy), elections have not been held for the legislative or executive body since 2006. Even when the President, who has the right to call them under Palestinian law, calls them, Hamas has consistently opposed them. Israel’s blockade was too restrictive before 2010 and that was wrong – now, the security blockade in place would not be there (as it wasn’t when the PA controlled the area) if there was not a security threat. Palestinians very likely see that – which explains the Palestinians’ continuing opposition to Hamas. Hamas and the other factions have also fired rockets which have led to Israeli response – often in their own areas – which probably explains why 70% of Palestinians want them disarmed.

And this brings us to violence in the Israel-Palestinian conflict – does it really increase radicalisation and lead to more violence? Again, the empirical support is simply not there. Before I get on to the academic literature, I just want to give one example of one set of polling. Operation Cast Lead was carried out from December 2008 to January 2009 – it’s worth looking at polling before and after the attacks to see the support for Hamas. In a December 2008 Near East Consulting poll (before Cast Lead started), support for Hamas was low: Hamas would only have won 10% in the presidential elections, 11% in legislative elections and when asked to respond to the statement, “Some believe that Hamas will win the next election,” a majority obviously disagreed.

In the next Near Consulting Poll in March 2009, the results had not changed much at all: 11% believed Hamas only represented them, they would have received 14% of the vote in presidential elections and they would have won 16% in the legislative elections. Operation Cast Lead seems to have no negligible effect on supporting terrorist organisations. This also explains why Hamas opposes elections: it would get blown out of Palestinian politics.

And this is a consistent finding in the academic literature. In a Journal of Public Economics article, Jaeger et al (2012) investigate “effects of violence on the political preferences of an aggrieved population.” The results are robust and show that “the overall effect of Palestinian fatalities is not statistically significant.” And the same results apply for not just supporting radical groups but their attacks on civilians too. From Haaretz:

Indeed, Palestinians are no more likely to support attacks on civilians than Israelis (in fact, across the Middle East, attacking civilians is a minority position). At the risk of pushing my point again – the same is true for the “killing one of them makes more” argument. Jaeger and Paserman (2008) examine the statistical evidence and conclude “the direction of causality... runs only from violence committed by Palestinians to violence committed by Israelis, and not vice versa.” That is, Israeli casualties lead to Palestinian casualties – but Palestinians casualties do not lead to Israeli casualties. Again, this really shouldn’t be surprising: Israeli counter-terrorism policy through targeted assassination, wide ranging military action is designed to deter and comes in response to terror.

Again, Operation Cast Lead is illustrative of this policy. This came after Hamas first escalated violence in November during the ceasefire and then refused to sign up to another one (see this post for a detailed analysis of the ceasefire). Israel responded – and the result was not more violence: 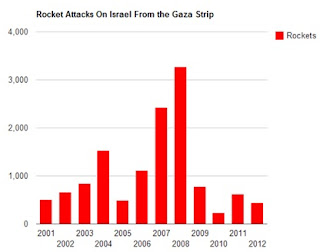 In fact, post Cast Lead yielded Israel’s “quietest year” in a decade: there was a 90% reduction in the first year and even at its highest levels, rocket fire has not matched even a third of 2007 levels. Something that is even more interesting is how much the circle of violence argument gets it the wrong way around. Hamas, after Cast Lead started patrolling the areas to make sure rockets weren’t fired. They have fired rockets since Operation Cast Lead, but the deterrence – not radicalisation - effect is clear from the graph.

Al Qaeda and its allies

I have covered some of the ground on why foreign policy is not the reason for support for Al Qaeda. Briefly, again, the vast majority of Muslims across the Middle East don’t like Al Qaeda. This gives prima facie evidence to the position I’m advocating: if foreign policy is the cause, why do we not see a wide spread response? To make an analogy: conservatives often argue that pornography leads to violence (in fact, it does the opposite) – but surely, there can be no causal connection by the simple fact that most people can enjoy pornography without grabbing an axe. Even in the West – just think about: a lot of people oppose American foreign policy. They don’t start jumping for AK47s and start supporting Al Qaeda.

And again, the academic support for what I am saying is clear (the support for what is the cause is in the aforementioned 9/11 post). Robert Pape claims to have evidence that occupation leads to suicide terrorism – except his thesis has been thoroughly discredited: the statistics are selective, the thesis inconsistent and stretched to find America at odds. Max Boot has discredited his “study” enough and I would have nothing to add to continue to talk about Pape’s polemics. I would just give one example from Boot of why Pape’s thesis is nonsensical. Over 12,000 people have been killed in Pakistan by Islamist terrorists – and yet there is no occupation. Pape’s answer should have everyone in hysterics: “the alliance between Pakistan and the United States evolved into—what is better termed—an indirect occupation.”

The drone programme also provides another opportunity to put the hypothesis to the test. I have already quoted two studies on how the drone programme has not led to “blowback.” The Washington Post recently claimed that the drone campaign in Yemen is “increasing sympathy for al-Qaeda-linked militants and driving tribesmen to join a network linked to terrorist plots against the United States.” This was based on “20 interviews with tribal leaders, victims’ relatives, human rights activists and officials from four provinces.”

Except, this does not seem to be the end of the matter – Christopher Swift disagrees in an article published in Foreign Affairs. Swift interviewed “40 interviews with tribal leaders, Islamist politicians, Salafist clerics, and other sources.” His conclusions are vastly different from the Washington Post’s:

As a group, they were older, more conservative, and more skeptical of U.S. motives. They were less urban, less wealthy, and substantially less secular. But to my astonishment, none of the individuals I interviewed drew a causal relationship between U.S. drone strikes and al Qaeda recruiting. Indeed, of the 40 men in this cohort, only five believed that U.S. drone strikes were helping al Qaeda more than they were hurting it.

Both studies are limited because they are based on interviews not data on recruitment, attacks and American drone activity. That said, if I had to choose one of these two, I would naturally go with the study with the larger sample. So do I think that “when a U.S. drone missile kills a child in Yemen [or anywhere else mentioned above], the father will go to war with you, guaranteed”? Nope.
Posted by Mugwump at 10:32

"In a Journal of Public Economics article, Jaeger et al (2012) investigate “effects of violence on the political preferences of an aggrieved population.” The results are robust and show that “the overall effect of Palestinian fatalities is not statistically significant.”"

NHST strikes again! This is not how to do statistics.

This really interested me to read. Foremost, I feel like I didn't realise what the actual question was when people said the answer was "our foreign policy". By that I mean that I have always taken it to mean:

"There will always be people willing to commit violence for political reasons so we should have a foreign policy that doesn't make us the target."

That isn't a particularly great moral stance, of course: it's a bit like putting just enough security on your home so that people burgle your neighbours, rather than looking into changing society so people don't feel the need to burgle anyone. But maybe that's all we've got.

So fundamentally, I'm convinced by the statistics that you don't make more suicide bombers/terrorists via your foreign policy, but I'm sort of surprised anyone really is drawing that line directly. (And never would have really said that in any case.)