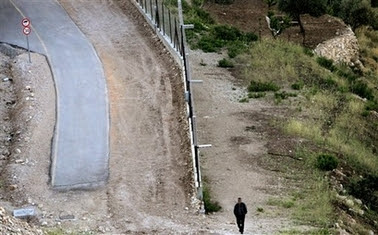 A Palestinian man sneaking to Israel crosses from Bethlehem, right, into Jerusalem, left, Monday, May 15, 2006. AP
When I started writing this I naively intended to write about three things: the separation barrier, the situation of Gazans and Arab immigration to Palestine. These three things are key talking points of Zionists and I wanted to give a more nuanced and substantive view of them - leaving out the propaganda and coming to a more reasoned view. But, as I started writing about the separation barrier I realised there was no way I could write it all in one post. The separation barrier is claimed by Zionists to be justified because it single-handedly brought the terror down (see for example the Israeli government, Mitchell Bard, the ADL and I assume that the crock Alan Dershowitz makes the argument as well).
Reduction
The drop in suicide bombing in Israel after the barrier started to be built is hard to deny. When the fence only covered the north of the West Bank, attacks fell from 17 to 5 from 2002-2004. In contrast, in the south of the West Bank where nothing was constructed from 2002-2004, attacks increased from 10 to 11. Hamas in carrying out terrorist attacks began targeting areas available from the south because they were easier to bypass. Amos Harel, Haaretz and one Israel’s leading security analysts made this point in 2004:
Since the completion of the first stage of the separation fence - from Salem to Elkana - in the summer, terror has migrated to the south and east, to areas in which the fence has not yet been built.
And we have evidence straight from the horse’s mouth:
Mousa Abu Marzouq , deputy chairman of Hamas's political bureau in Damascus said that “[carrying out] such attacks is made difficult by the security fence and the gates surrounding West Bank residents ”
Islamic Jihad leader Ramadan Abdallah Shalah said that they had no intention of abandoning suicide bombing attacks but that their timing and the possibility of carrying them out from the West Bank depended on other factors. “For example,” he said, “there is the separation fence which is an obstacle to the resistance and if it were not there, the situation would be entirely different”
Multiple Causes: Undermining the Zionist Narrative
But, it is ludicrous to state that the barrier is the main reason or the only reason - especially today. Firstly, Palestinian infiltrators into Israel continue to sneak passed the border in their thousands. According to Israel’s Channel 2 news in 2007 there were over 17,000 arrests of illegal workers inside the Green Line in the space of two months. There are various frequent reports of random numbers of Palestinians crossing the line and being sent back (154, 50, 252). It’s inconceivable, given the sheer numbers, that the physical restrictions in crossing the border are enough to account for the decline.
Secondly, its important to note that the barrier is not finished (around two-thirds have been built) – indeed, Israeli police officials consider this to be a “calling out to terrorists.” This also explains why infiltrations are common. Thus, there must be more factors that contribute to the reduction than the incomplete fence which doesn't stop Palestinian workers. Part of the factors are indeed attributable to other Israeli counter-terrorism measures taken:
But equally as important is that the Palestinians themselves have contributed much to the decline of attacks. While the fence played a major role during the Intifada, from 2005, there was an unofficial truce which contributed considerably to the decrease. Shin Bet and the IDF said in 2006 that "main reason for the reduction in terrorist acts over the past year is the truce in the territories" and attribute the reduction to "improvement in their joint capability to foil terrorist attacks and to act against terrorist organizations." And in the aftermath of the battle between Hamas and Fatah, Fatah carried out extensive security operations against Hamas which is probably the biggest reason for the reduction in current violence. So much so that by 2010, Israeli officials were commending PA Security Forces:

Multiple consequences
Undeniably, the route of the fence has meant land confiscations; estimates of land inside the barrier and the Green Line range from 7% to 9.5%. B'Tselem documents how the barrier has ulterior moves including the expansion of existing Israeli settlements and often these motives took over:

...security-related reasons [were] of secondary importance in certain locations, in cases when they conflicted with settlement expansion, the planners opted for expansion, even at the expense of compromised security.

The barrier has also had negative effects on freedom of movement, access to agricultural land and the indirect effects to employment and healthcare. The Israeli Supreme Court even says that it goes beyond these issues, "The injury is of far wider a scope. It strikes across the fabric of life of the entire population." The result of the better security position was actually an easing of the internal security aparatus in the West Bank: in 2010, there were only 14 checkpoints in the West Bank (vs. 528 in 2006) but all the aforementioned negatives are unlikely to be outweighed.
Overall, the barrier has contributed to the reduction of terror attacks against Israelis. Its significance has declined since the reduction of the threat (which came about mainly through Israeli counter-terror operations and joint PA-Israel cooperation). It has had several negative effects. The solution should be improving the faults not removing the barrier itself. The constant appeals to the Supreme Court should be used to re-route the barrier which helps avoid many of these issues. The courts reasoning on the barrier should be implemented effectively:


We accept that the military commander cannot order the construction of the separation fence if his reasons are political. The separation fence cannot be motivated by a desire to "annex" territories to the State of Israel.. Indeed, the military commander of territory held in belligerent occupation must balance between the needs of the army on one hand, and the needs of the local inhabitants on the other.

And just two final points: it is not a “Wall,” and trying to label it as such is ignorant given that over 90% of it is a fence. Secondly, just a word on the rationale that is being defended: the role of the barrier is not to protect Israel, it is to protect Israelis. And to that end, the barrier should protect civilians who are in the illegal settlements in the West Bank. Indeed, there was a greater casualty drop between 2002 and 2004 for Israeli settlers than there were for Israelis within the Green Line (90% vs. 75%). Their illegal presence does not mean they should be left to the slaughter. Nor should it mean that their position is made sacrosanct by the route of the barrier - as the Supreme Court says it cannot be used to annex land.
Posted by Mugwump at 10:12